This site provides information on the Comprehensive Assessment of Psychopathic Personality (CAPP). CAPP is a concept map that describes the key symptoms of psychopathic personality disorder. The CAPP concept map was developed (CAPP DEVELOPMENT) through multiple processes, including reviews of the clinical and research literatures together with detailed interviews with subject-matter experts. The information gained was translated into natural language trait-descriptive adjectives or brief adjectival phrases. Thirty-three symptoms were derived and then allocated to six domains representing basic functional domains of personality—Attachment, Behavioural, Cogntive, Dominance, Emotional, and Self. 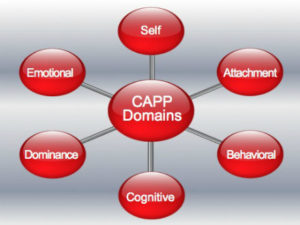 The CAPP concept map is hierarchical in nature; the disorder is underpinned by six domains, each entailing between 4 and 7 symptoms, and each symptom is further defined by a triad of trait-descriptive adjectives or adjectival phrases. This concept map can represent the concept in around 180 words of text or a single graphic.

The CAPP concept map allows us to understand what we want to measure; therefore, different measures can be developed to operationalize the map and guide how we capture the essential features of the concept. And this is what we have tried to do.  The distinction between concept and operation is an important one. It is common to conflate what is being measured—the concept—with how it is being measured—the test or scale. Clearly, the concept of intelligence is not the same as the score on an intelligence test. Failure to make the distinction between concept and measure impairs effective research; for example, if findings are based on only one measure it is impossible to determine whether findings reflect properties of the measure or properties of the underlying construct.

Importantly, the CAPP is a process developed primarily for research. While it is experimental and currently undergoing validation, there is growing evidence for the clinical validity and utility of its measures.

There is growing evidence that some users think it is appropriate to use CAPP measures as a structured professional judgement approach to the assessment of psychopathy, to be utilised in addition to standardized, validated measures or in situations where no such measures exist; for example, for assessing change or situations where a detailed and nuanced diagnostic formulation is required.

The newest addition to the CAPP is the self report instrument CAPP-SR, developed by Selbom, Cooke and Schou. The CAPP-SR is available on this website for use and scrutiny. In brief the CAPP-SR is a 99-item measure; participants rate each item on a 4-point scale (False, Mostly False, Mostly True, and True). The 33 CAPP symptom scales consist of mean aggregates of their three items, with scoring ranging from 0-12 for each.

The CAPP-SR is currently considered a research instrument and should be used accordingly. Clinical application using the CAPP-SR is not indicated until a substantial research base has accumulated on the instrument, documenting both construct validity and clinical utility.

The CAPP-SR has been translated into several languages which will soon be available on this site.

We are inviting mental health professionals and other people without any mental health experience to take part in a short survey.

The survey is looking at how well people can rate themselves and others on different personality characteristics that may be relevant to psychopathic personality disorder (PPD).

More about the survey
Take the Capp survey